educator, internationalist, recently retired Vice-Chair of the UK National Commission for UNESCO and advocate for the right of every child to have the best education possible.

Gary Brace who has died suddenly aged 65 was a passionate and widely respected educator with national and international influence.

In his most recent role as Vice-Chair and Non Executive Director for Education of the UK National Commission for UNESCO (UKNC) he engaged UK educators in actions to support the United Nations Sustainable Development Goals which, for education, are focused on every child in every country receiving the best education possible.

Professor Sarah Younie from De Montfort University remembers his invaluable contributions to the ongoing series of Global Knowledge Mobilisation Summits for education, organised by the MESHGuides network. Gary, through his UNESCO role, was a strong supporter for the development of the MESHGuides system, accessed by educators in over 200 countries, freely sharing of research-based knowledge relevant to educators everywhere. Gary’s open & collaborative approach enabled a successful partnership that was built on the warmth Gary brought to a shared vision for enhancing education worldwide through research.

The UK Ambassador to UNESCO, Matthew Lodge, in thanking Gary on his retirement mentioned Gary’s work across the four countries of the UK and his contribution to multiple influential UKNC policy briefs in the education field, which were shared by other member states and UNESCO, informing their views. Gary championed the UK’s engagement with the UNESCO Associated Schools Programme (ASPNet) which connects 9000 institutions in 180 countries and he represented the UK as a delegate at the Education Commission at UNESCO General Conferences and at the Executive Board.

Prior to his UKNC role, Gary was the first Chief Executive of the General Teaching Council for Wales.

He was regarded as a hugely positive, influential and transformative leader for Wales and his commitment to the sphere of education has been widely recognised in Wales, across the UK and internationally. Gary received various accolades for his commitment and dedication to education and for his vision of ensuring equity and equality for all. This was celebrated through being awarded the University of Glamorgan Chancellor’s Medal in 2009, Fellowship of the International Professional Development Association in 2013 and more recently the Honouree Fellowship from the University of Wales Trinity Saint David in 2018. These awards truly epitomised his National and International commitment to History and Education and a true reflection to what Gary stood for in his life.

He was the son to parents Irene and Eric Brace, a devoted father to Laurie, Emily and Andrew, brother to Nicole and Tadcu (grandfather) to Aria & Ieuan. Gary (Garwyn) grew up in Ely, in Cardiff and was educated at Herbert Thompson Primary before moving to Cantonian High School. He described his upbringing as one of the happiest he could imagine, rich in culture and with a strong family focus. The values of his Methodist upbringing guided Gary’s lifelong compassion for others and public service. It was through Gary’s early experiences of history inspired by both his Belgian mother and Welsh father’s wartime romance that led him to train as a History teacher. In 1975 he graduated from Cardiff University with a BA in History. He began his career in Lady Mary High School before being appointed as Head of History at St David’s Sixth Form College a few years later. His teaching career began with teaching History and Government & Politics and during this time, he piloted the new GCSE examination and led the WJEC’s pilot of a new A level history syllabus. These experiences led to him taking on national responsibilities with posts at the Curriculum Council for Wales and the Qualifications, Curriculum and Assessment Authority for Wales (ACAC).

In the post-Soviet Union 1990s, Gary undertook work in the Russian Federation and in Georgia as a Council of Europe history curriculum expert and speaker. He also authored and co-authored various official curriculum and assessment publications, including teacher guidance booklets for BBC and Channel 4 history series. In 2000, Gary became the first Chief Executive of the General Teaching Council for Wales, holding the post from its inception until his retirement in 2014. Gary was always motivated by a collaborative and co-operative global outlook and his voluntary public service was within the field of international education. 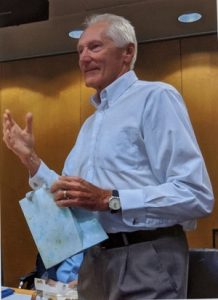 Hayden Llewellyn, Gary’s (then) deputy remembers him as an articulate and dedicated Chief Executive. The establishment of a teaching council in Wales was hard fought, with campaigning dating back over many decades. Gary’s hard work ensured that it was a success and became a key part of the education landscape in Wales, before handing over the reins on his retirement.

Education was not the only passion in Gary’s world. As an adult he played in two rock bands, and was involved with his community in putting on musicals. As a youngster he had various stage and music related appearances, including recitals and Eisteddfods.

David Simmons from Llandaff Rowing Club remembers Gary as a much loved and highly respected member who made an immense contribution. He was at different times its President, Chairman and Safeguarding Officer. But he was also frequently to be seen sweeping the landing stage, driving a trailer load of boats to a regatta, or coxing a crew of novice rowers, imparting both his knowledge and love of his sport.

He represented his club through competing in both European and World Masters (veterans) championships. Perhaps his most memorable year was 2016, when with his double sculls partner Stewart Griffiths, he performed well against high level competition at Henley Masters Regatta, then went on to win a gold medal at the British Masters Championships.

Gary and I shared a commitment to the vision of teacher research providing the foundation for self-improving education systems.